Special thanks to author, Darcy O'Connor - Secret Treasure of Oak Island and the Chester Municipal Heritage Society.
THE OLD GOLD SALVAGE & WRECKING CO. was formed in April of 1909 by Henry Livingston Bowdoin of New York, a noted adventurer and engineer, who claimed that, “with modern methods and machinery, the recovery of that treasure is easy, ridiculously easy.” Bowdoin formed The Old Gold Salvage and Wrecking Company, supported by investors like future US President, Franklin Delano Roosevelt and previous treasure hunter, Captain John W. Welling.

The following details are taken from Bowdin’s September 19, 1911, Collier’s Magazine Article.
We landed on Oak Island August 27, 1909.   Our machinery and stores were landed at Smith’s Cove, and we made an examination of the island, guided by the man who had charge of the last expedition and who had located the two tunnels leading to the Money Pit. Not being able to locate the tunnel, we hauled our machinery to the Money Pit; erected derricks and built our camp.
There are two pits side by side, the Money Pit, 5 ft by 7 ft, heavily cribbed to 110 ft, and another pit, 7 ft by 7 ft, built by the last expedition.  We found the Money Pit floored over at the water’s edge, 30 ft below the surface, and partly filled with rocks and dirt.  The accumulation was cleaned out, the cribbing strengthened in places and the flooring removed.
In sounding, we found an obstruction 10 ft under water.  A pump was set at work and the water lowered 30 ft, disclosing a cross-beam in the center of the pit with a platform every 10 ft and ladders from platform to platform.  The pump was removed, and with our orange-peel bucket and other gear we broke out the cross-beams, platforms and ladders to 107 ft.  Our diver was sent down to make an examination.  He reported the cribbing in bad shape and the bottom covered with plank and timber sticking up in all directions.  The bucket was again put to work, clearing the pit to 113 ft.  As the pit was not cribbed below this point, we decided to locate the treasure with our core-drill and then sink a caisson down to it.
A core-drill brings up a continuous piece of the material through which it goes, 1 1/2, or more, inches in diameter. We bored in the spot indicated; through 17 ft of coarse gravel and sand; then 16 ft of blue clay, small stones, and sand, and struck the cement at 149 ft, as predicted.
We cut through six inches, and withdrew the core so as to start clean on the box of gold.  The core showed a solid piece of cement about six inches long.  Our hopes ran high.   We put down holes vertically, and with as wide angles as possible, so that a larger space then the area of the pit was perforate with holes to depths of 155 to 171 ft, and so placed that anything over 2 ft square must have been struck.  We struck cement six inches to ten inches thick at depths of 146 ft to 149 ft, but no traces of boxes, treasure or anything of that kind.  The cement was analyzed by Professor Chandler of Columbia University and found to be natural limestone pilled by the action of water.  We housed the machinery and gear and left Oak Island November 4, 1909.

​Bowdoin wrote to treasure trove license holder Frederick Blair asking for an extension to their agreement.  Blair was agreeable to this with proof of sufficient funds to complete the work.  Surprisingly, this sparked an argument between the two men.  Bowdoin then published his article in which he dismissed the idea that there was any treasure.  Frederick Blair responded by writing a long defence of the Oak Island treasure in the Amherst Daily News in February 23, 1912.

Photos of the Bowdin expedition.  Most are of Oak Island, some are not. 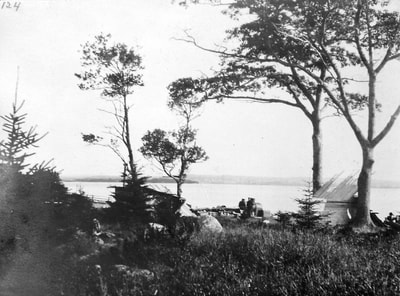 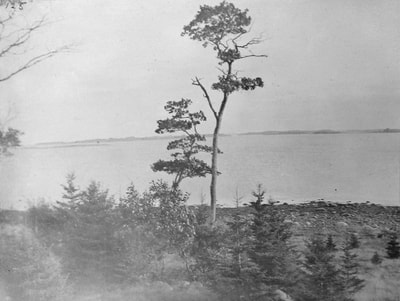 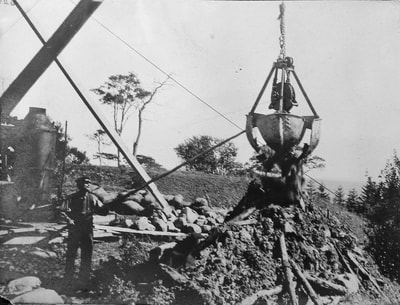 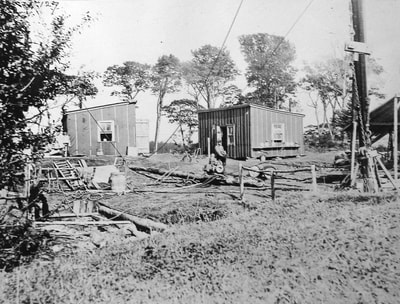 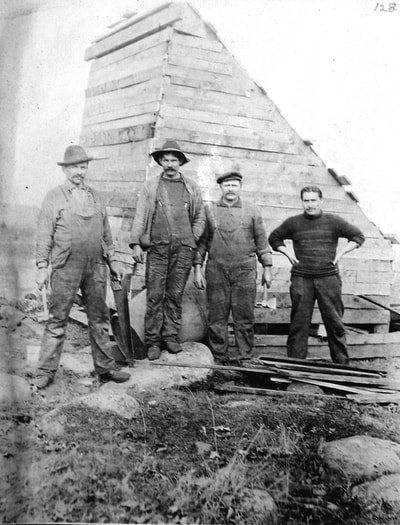 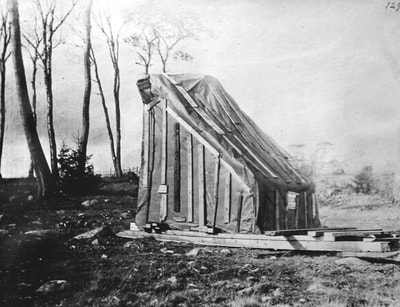 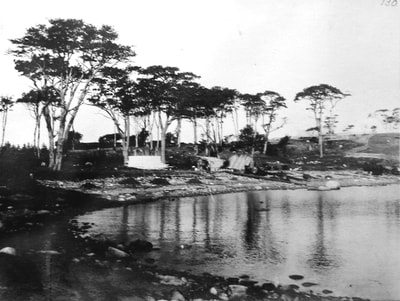 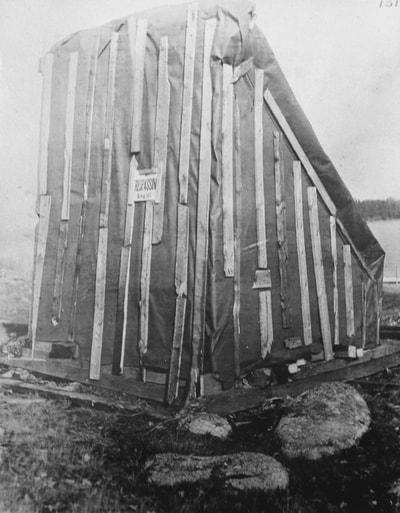 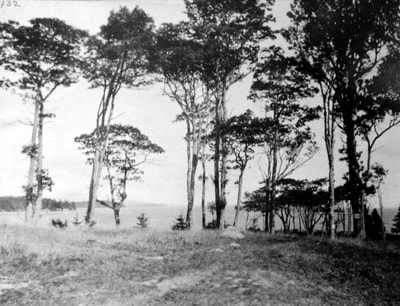 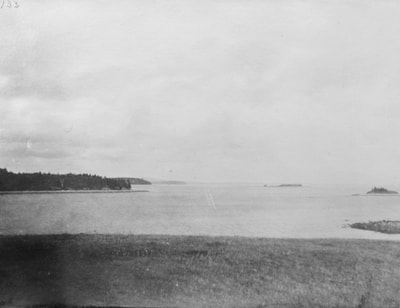 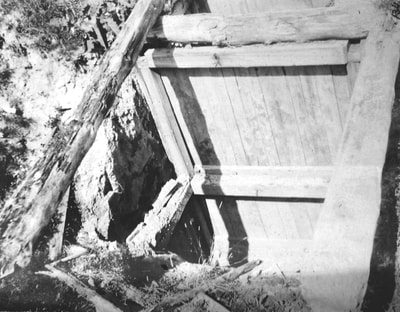 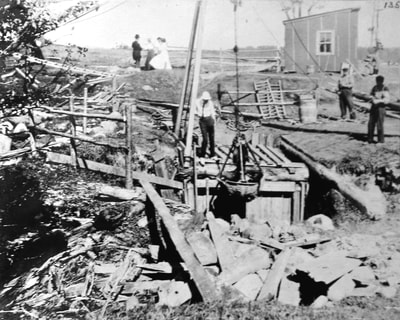 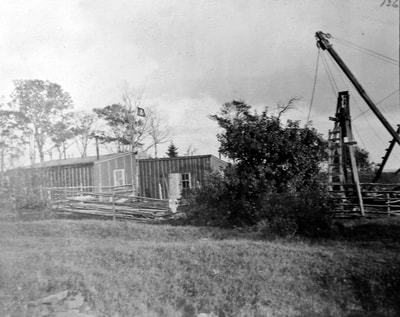 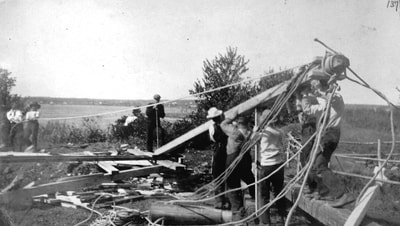 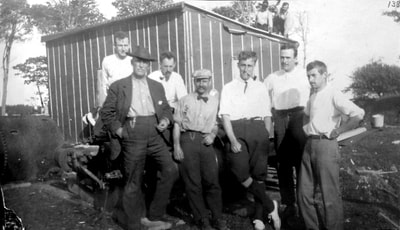 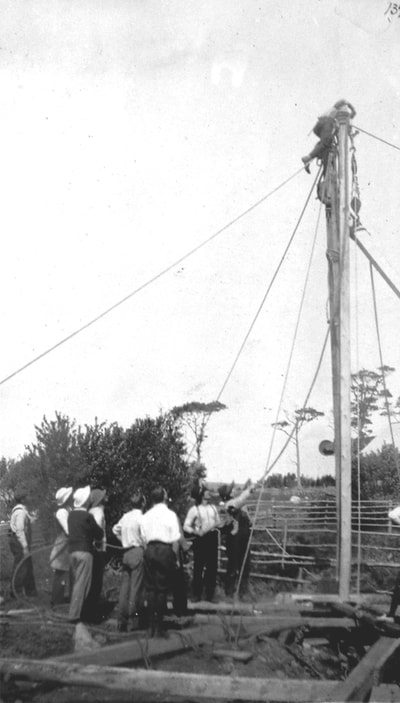 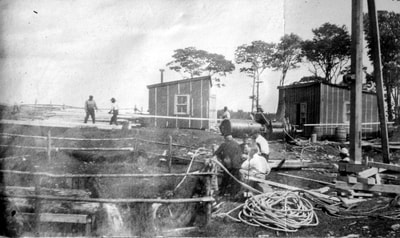 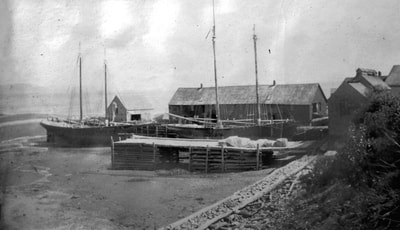 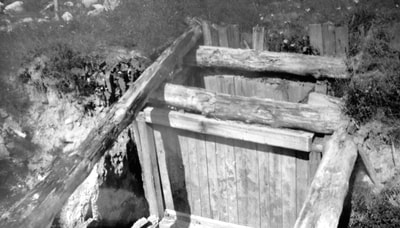 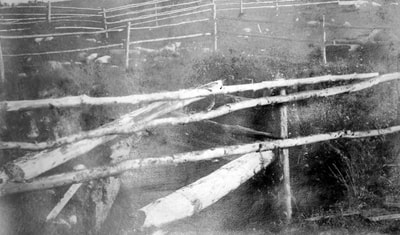 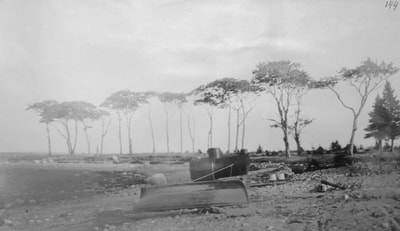 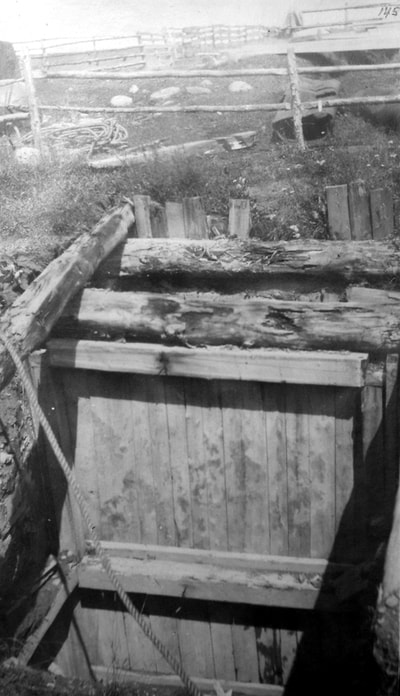 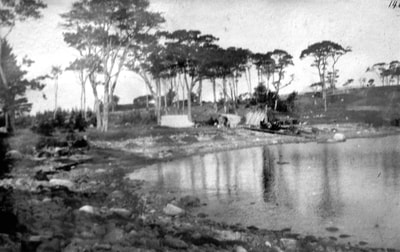 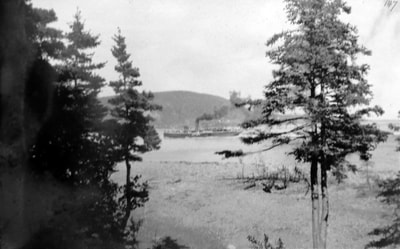 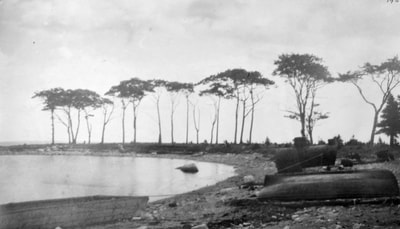 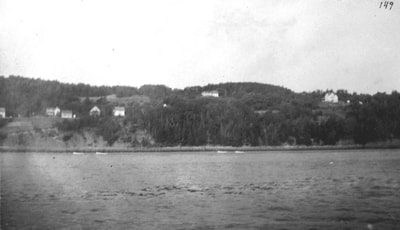 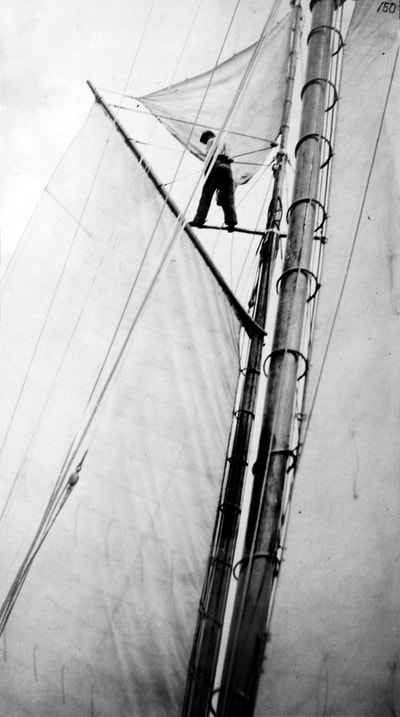 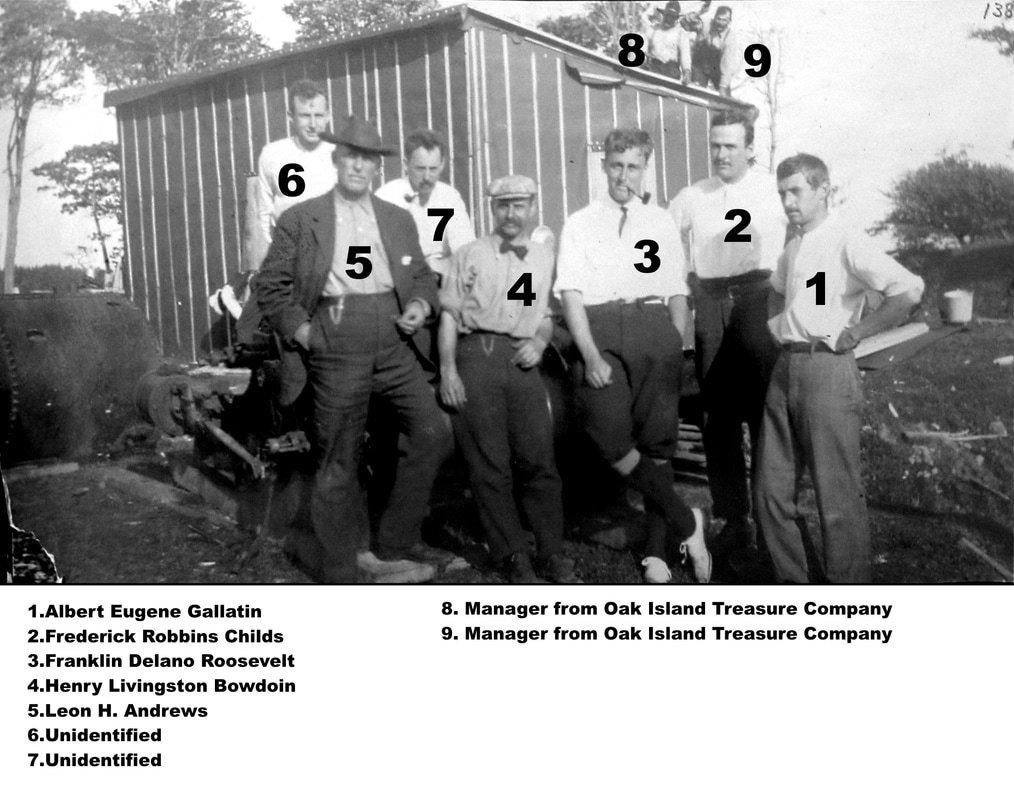 President Franklin Delano Roosevelt is Oak Island’s most distinguished treasure hunter.  At the time, FDR was a 27-year old law clerk for the New York firm Carter, Ledyard, and Milburn when he purchased stock and joined some of his school mates and friends in the Old Gold Salvage and Wrecking Company expedition on the island just before his bid to become a Senator and later
Governor of New York.

His interest in Oak Island went back to his boyhood years spent at his parents, Sara Ann Delano Roosevelt and James Roosevelt I, summer home on Campobello Island in New Brunswick's Bay of Fundy, spending four days on near by Grand Mannan Island digging for a chest supposed to have been buried by Captain Kidd. All they found was an old plank on which some hoaxer had carved "W.K." the initials for Captain. William Kidd.

In an interview FDR family friend and Oak Island explorer Duncan G. Harris gave in 1967 on the subject of FDR's interest in Oak Island.

"Franklin thought they were the lost jewels of Louis XVIII and Marie Antonette, when they made their escape, had the jewels in a little bag in barouche. She handed the jewels to a lady-in-waiting, and that girl went to Canada, close to Campobello. This girl always said the jewels were buried at Mahone Bay NS that's why Franklin who heard the story put some money in our expedition."

In August of 1909, he saw an opportunity to become associated with the search, and that summer he made several brief visits to the island. Some of his New York friends, Duncan G. Harris, Albert [E.] Gallatin, and John W. Shields, Leon H. Andrews, Frederick R. Childs, George D. Mosher, and Capt. Henry L. Bowdoin shared  his interest, and they too  purchased shares in the venture,  along with two well known Oak Island men Frederick L.  Blair and Captain John W. Welling, from the previous Oak Island Treasure Company expedition.  An avid sailor and yachtsmen, while he was cruising the coast in Nova Scotia, he dropped by Oak Island to visit his friends and see the operation for 1 to 2 days where some of these photos [B&W Series] were taken on the island.

Roosevelt's fascination with Oak Island continued long after his own involvement in recovering the treasure. His extant personal papers include correspondence relating to Oak Island dating as late as 1939, while he was in his second term as President of the United States, and his fellow 1909 searchers and later investigators, cover a thirty-year span and indicate that he maintained a great interest in the baffling mystery of Oak Island.

With the help of his family friend Duncan G. Harris, FDR kept up the the current operations on Oak Island, and exchanged letters with two more Oak Island Treasure Hunters from 1937 thru 1939, The former Mayor of Chattham, New Jersey, Gilbert D. Hedden and New York Professor Erwin H. Hamilton.  He also read the April 1939 Popular Mechanics article on the island.  FDR had fondness and fascination for the island was noted in this letter from August 31, 1938.  In a series of subsequent letters he had talked about arrangements with Hamilton to visit again. They had even discussed the idea if using a Navy ship to make a trip. Had it not been for the war, which prevented him, he may have returned:

Your note came while I was on my cruise in the Pacific.
I wish such I could have gone up the Coast this summer
and visited Oak Island and seen the work you are doing --
for I shall always be interested in that romantic spot.
I hope you will let me know how you have getting on with
modern methods, ours were, I fear, somewhat antiquated when
we were there more than a quarter of a century ago.